Collections will be accepted through the summer months, Monday – Friday 8am – 3pm Please note that masks are encouraged to be worn covering your mouth and nose while inside the building if you are vaccinated, and masks are required to be worn by those not fully vaccinated.

Soldiers & Sailors’ weeklong Summer Camp program alternates each year between Civil War and World War II themes. There are full-day (9AM-3PM) and half-day (9AM-12PM) options available. Lunch is provided for both options and an afternoon snack is provided for the full-day option. The camps are intended for students entering 5th, 6th, 7th and 8th grade. Tuition for the camp is $200 for the full-day option and $100 for the half-day option.

Students will engage in a variety of activities which will include, but are not limited to:

• Interaction with re-enactors, veterans and special guests.• Hands-on experience with artifacts and reproductions from the museum’s collection.• Tour of the museum’s extensive exhibits.• Daily sampling of foods from the era.• Listening to and singing songs from the era.• Reading interesting stories, articles and working with Primary Sources.• Arts and crafts activities

Spotlight On: The Purple Heart

The Purple Heart is one of the most well-known military decorations. Established shorty after World War I, the medal is awarded to those who are wounded or killed in action against an enemy while serving in the United States military. Learn the history of the Purple Heart and hear stories from Curator Michael Kraus about individual recipients included in our collection. Also joining the program will be First Lieutenant (Ret.) Dan Telep who served in United States Marine Corps during the Vietnam War and received of two Purple Hearts. August 7th is Purple Heart day, so please join us a couple days after in the evening of August 12th to honor those who sacrificed for our country. 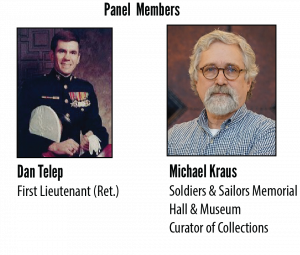 Dan was born and raised in Detroit and graduated from Wayne State Univ. in December 1966. Having previously spent two summers in Quantico, VA with the USMC in their Officers’ Candidate School, upon graduation, Dan was commissioned a 2nd Lieutenant and returned to Quantico for Leadership Training until June 1967.

Deployed as an Infantry Officer to Vietnam, he arrived in country in late June 1967.  There he was assigned a Rifle Platoon in the 1st Battalion, 9th Marine Regiment, 3rd Marine Division in Northern ‘l Corps” at the D.M.Z.  Immediately upon arrival, his unit was engaged in a fierce 10-day battle with the 324th Division of the North Vietnam Army. This first engagement of his newly deployed unit, called “Operation Buffalo”, included the grizzly first assignment of evacuating 85 recently killed brave Marines. Their sacrifices, their deaths, this memory first hand, cemented his dedication to the celebration we now call “Memorial Day”.

Having extended his tour, Dan spent a total of 19 months in Vietnam and received two Purple Hearts, a Bronze Star Award with Combat V, and two crosses of Gallantry.  He finished his tour of duty at Camp LeJeune in NC, returning to Detroit to obtain his M.B.A. with a plan to pursue a career in Marketing Discipline. Dan now lives in Sewickley has been married to Kitty Fay Telep for 48 years, has four children and enjoys 7 grandchildren.

A memorial service will be held Saturday, August 21, 2021 at 1pm at Soldiers & Sailors Memorial Hall & Museum to remember and honor Code’s life.