The John L. Ford, Sr., African American Heritage Celebration is a FREE annual event focusing on the sacrifices & contributions of African-Americans during the American conflicts. Developed in 2011 by Mr. Ford, the event has become a valued aspect of the museum’s community outreach. In 2020, the African American Heritage Celebration was renamed in honor of the late John L. Ford, Sr., who served as Soldiers & Sailors Historian from 2007 through 2017.

African Americans played a significant role during the Civil War. This panel discussion will specifically examine the involvement of the African American community in Western Pennsylvania leading up to the conflict, during the war and the aftermath. Topics addressed will include both the significant contributions made while serving in the military and at back at home. There will also be a special appearance by the Soldiers & Sailors 6th Regiment USCT Drum Corps. Please join us to learn about this significant time in American History and the substantial impact made by the African American community in Western Pennsylvania. 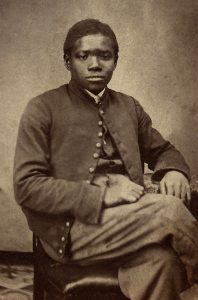 Award-winning journalist and Pittsburgh native Lynne Hayes-Freeland hosts a talk show on KDKA Radio Monday-Friday from 12pm to 3pm. She is also producer/host of “The Lynne Hayes-Freeland Show,” a weekly half-hour program airing at 11am on WPCW-TV, which concentrates on local African American issues.

She began her broadcast career as the producer of the Roy Fox Show on KDKA-Radio. Since joining KDKA-TV2 in 1976, Lynne has held a variety of positions. She was a field producer for the station’s “Evening Magazine” program. In 1981, Lynne moved to the station’s programming department where she created “Weekend Magazine”, produced what was then known as the “Vibrations” program, and directed a variety of commercial efforts. In 1985, Lynne began a five-year stint as the producer of KDKA’s Annual Children’s Hospital Free Care Fund Telethon. As a result of those efforts, Lynne was named Director of Community Programs until her move to the news department.

An active member of Alpha Kappa Alpha Sorority, Inc., Lynne has also been involved in a variety of community service work including volunteering time on several local Boards. Her work has been recognized by organizations both locally and nationally.

Award-winning historian and USMC Veteran, JaQuay Edward Carter, is committed to serving others. Mr. Carter has a long history of community service, military service, and human services advocacy. JaQuay began his post-secondary education at the Community College of Allegheny County, earning an associate degree in Ethnic and Diversity Studies. Soon after, he enrolled at the University of Pittsburgh, where he received his undergraduate degree in History Education/Africana Studies. In 2018, JaQuay was directed back to his hometown of Hazelwood through his passion for history and neighborhood pride. He founded the Greater Hazelwood Historical Society of Pittsburgh and Cultural Center. The following year, he created the Black History Society of Western Pennsylvania, which is dedicated to the research and repository of our region’s African American experience.

Richard is a public historian from Western Pennsylvania, currently living in the South Carolina Lowcountry. For nine years, he has worked with a multitude of sites and organizations, including The Battle of Franklin Trust, Soldiers and Sailors Memorial Hall and Museum, Harpers Ferry National Historical Park, Flight 93 National Memorial, and Reconstruction Era National Historical Park in Beaufort County, South Carolina. Condon is the founder of Civil War Pittsburgh and contributor to the “Pennsylvania in the Civil War” blog, which both focus on education and preservation regarding Pennsylvania’s role in the American Civil War.