January 18, 2018
0
Calendar
Tickets
Add to Calendar
When:
February 8, 2018 @ 6:00 pm – 8:00 pm
2018-02-08T18:00:00-05:00
2018-02-08T20:00:00-05:00
Where:
Soldiers & Sailors Memorial Hall & Museum
4141 5th Ave. Pittsburgh
PA 15213
Cost:
$0.00
Contact:
Connie Robertson
412-621-4253
Email
Event website
Renowned historian Samuel W. Black will speak on the post-Civil War South focusing on Reconstruction as it relates to African American history. In addition, his lecture will include a discussion of the Freedman’s Bureau which was established to help former slaves transition into the post-slavery South.
Supplementing Mr. Black’s lecture will be the debut of a recently donated 16 piece presentation silver tea service gifted by the African American community of New Berne, North Carolina to the Union officer who headed the local Freedman’s Bureau in recognition of his efforts to aide in their transition. The exhibit will open at the event on February 8th and stay on display through the end of the month of February.
Samuel W. Black Bio:
Samuel W. Black is the Director of African American Programs at the Senator John Heinz History Center. He holds a degree in African American Studies from the University of Cincinnati and a graduate degree in Africana Studies from the State University of New York at Albany, where he was the recipient of the Perry Drake-Weston Award. He is the Immediate Past President of the Association of African American Museums (AAAM) and formerly served on the Executive Council and the advisory council of the Association for the Study of African American Life &
History as well as the program committee of the American Alliance of Museums.
Black is a member of the Afro-American Historical & Genealogical Society of Pittsburgh and the former vice president of the ASALH Dr. Edna B. McKenzie Branch. He is the recipient of the Dr. John
E. Fleming Award of the AAAM in 2016. From 1992-2002 he was Associate Curator for African American History at the Western Reserve Historical Society (WRHS) in Cleveland and archivists for the African American Archives collection. He had curated a number of exhibitions at the WRHS and other venues throughout
Northeastern Ohio, including, the photographic art of the “Yet Still We Rise: African American Art in Cleveland 1920-1970” exhibition of the Cleveland Artists Foundation; “I Could Stop on a Dime and Get Ten Cents Change” at the Cleveland Play House; and “The Sojourn of Black Women in Akron’s History,” at the Shirla R. McClain Gallery of Akron’s Black History, Pan African Culture Center, The University of Akron.
At the Heinz History Center he has curated: “Soul Soldiers: African Americans and the Vietnam Era” that traveled to seven cities and was the recipient of four awards including the American
Association for State and Local History Award of Merit and the Pennsylvania Federation of Museums and Cultural Organizations, S.K. Stevens Memorial Award. Other exhibits include, “America’s Best Weekly: A Century of the Pittsburgh Courier” and “From Slavery to Freedom” that received a U.S. Department of Education Underground Railroad Educational and Cultural
Program grant, as well as the AASLH Award of Merit (2013), the African Diaspora World Tourism Cultural Exhibit Flame Keeper Award for dedicated service in cultural tourism (2013), and the PA Museums President’s Award and S.K. Stevens Award (2014).
Black has authored a number of essays, book reviews, and narratives including, “African American Photographers of Cleveland, 1930-1965” in Yet Still We Rise: African American Art in Cleveland, 1920-1970; “Cleveland: Civic, Literary and Mutual Aid Associations” in Organizing Black America: An Encyclopedia of African American Associations; “The National Underground Railroad Freedom Center: Museum of Conscience” in Ohio Valley History Journal. He is the author of three biographies in African American National Biography, Henry
Louis Gates, Jr. and Evelyn Brooks Higginbotham, editors in chief.
In addition Black is the editor of Soul Soldiers: African Americans and the Vietnam Era (2006) and co-author of Through the Lens of Allen E. Cole: A Photographic History of African
Americans in Cleveland, Ohio (2012) Kent State University Press, and editor of The Civil War in Pennsylvania: The African American Experience (2013), the recipient of the AASLH Award of
Merit for 2014. 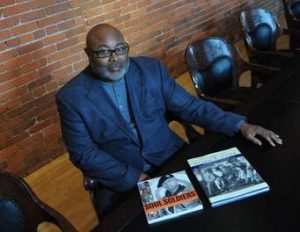