In Discovering Gettysburg: An Unconventional Introduction to the Greatest Little Town in America and the Monumental Battle that Made It Famous, you will visit with me a host of famous and off-the-beaten-path places on the battlefield, explore the historic town of Gettysburg as it is today, chat with some of the town’s fascinating “resources,” and follow along, as I did, with some of the most engaging storytelling I have ever had the pleasure of hearing. And nowhere inside will you be bothered with footnotes or stumble your way through academic mumbo jumbo. Thankfully, my friend and award-winning cartoonist Tim Hartman agreed to provide the magnificent maps and outstanding caricatures that grace this book.

About the Author: W. STEPHEN COLEMAN has spent most of his adult life as a professor of theater at the University of Pittsburgh. Post-retirement, however, Dr. Coleman discovered a new interest: The Civil War, and especially, the defining battle between North and South at Gettysburg, Pennsylvania. Today, Coleman channels the discipline and research he once devoted to his work on over 300 shows into writing. A specialist in Shakespeare, acting, directing and stage combat, he taught for more than 30 years and practiced his craft on stage and screen, including roles in Silence of the Lambs, where he had the pleasure of being literally defaced by the epicurean Hannibal “the Cannibal” Lecter and, the PBS Series, The War That Made America, where as the ill-fated General Braddock he was shot from the back of a horse. 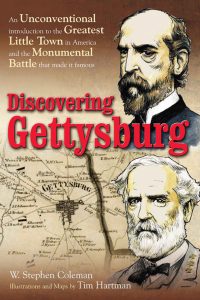