The Silence of the Lambs 30th Anniversary Movie Night 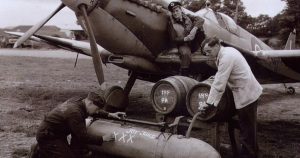 The story of beer in war goes back to the Romans and the Huns, if not to the beginnings of war itself. Generals, including George Washington, planned army movements around the delivery of beer rations for the troops. Soldiers have longed for a taste of their local beer as a reminder of their home and normality. Soldiers and sailors have exercised great creativity and daring in their efforts to bring beer to their comrades in arms. Focusing on the Civil War through Afghanistan, this presentation will examine how beer has impacted war and how war has changed beer.

Joe McAllister spent much of his career developing programs and services for not-for-profit organizations. He founded and developed the Autism Center at Children’s Hospital of Pittsburgh, co-founded the Advisory Board On Autism and Related Disorders (ABOARD, aka Autism Connection of PA) and developed the Department of Psychological Services for Watson Institute. McAllister retired from Watson in 2013 to work full time on the development of a national beer museum here in Pittsburgh. Similar in scale to the Rock and Roll Hall of Fame in Cleveland, Brew: The Museum of Beer will be a first-day destination attraction capable of accommodating 400,000+ visitors per year within a 50,000-square-foot complex. Paul Young is the brewer for BrewDog of Pittsburgh. He graduated from the University of New Orleans in 2005 with a film degree. He has spent his professional career working in documentary film, owning and operating a home beer and wine making supply store and as a professional brewer. He curated the Louisville Brewseum in Louisville, Ky – a mobile exhibit covering 200 years of beer history, and has taught hundreds the joy brewing their own beer. Paul has created and overseen events teaching team building, promoting the importance of support for local business and fundraising. He enjoys traveling, hiking, good beer and food and, especially, learning the ways the lessons of our history shape the present and design the future.