Spotlight On: One Year in the Curatorial Department

Guardian Angels began in 2009, when our Founder & Executive Director, Carol Borden was approached by Sam, a young man tragically paralyzed in a high school football accident. Sam required the constant aid of a caregiver, and had acquired a young German Shepherd named Bessie for companionship and a sense of independence, but quickly lost control of the dog. Carol, long known in Florida as an expert dog trainer, who’d been training dogs for nearly 50 years, was asked by Sam to train the dog. After what seemed like endless hours of training, there emerged this amazing service dog that was settled, obedient and able to give this man his life back. She now had the skills to pick up dropped items, open and close doors, bring him water from the refrigerator; help him move from his chair to the shower and so much more.

Watching Sam & Bessie function as a true team after the months of training brought everything into perspective for Carol, and at last she knew just what her years of dog-training and Business experience were for, and Guardian Angels Medical Service Dogs was born.

Since that first successful pairing, Guardian Angels is very proud to have donated more than 300 wonderful service dogs with deserving veterans and others in need. Guardian Angels trains for a variety of conditions, from mitigation of Post-Traumatic Stress Disorder and/or Traumatic Brain Injury symptoms, to seizure or insulin alerting, to mobility issues and more.

Guardian Angels Medical Service Dogs is funded primarily by donation and private grant support. Without you, we could not continue this life-saving work, and hope that you will visit our donation page and consider joining our Paw Prints Monthly Giving Club, and make a no-hassle monthly gift.

Every dollar truly makes a difference at Guardian Angels,  and donations go directly toward feeding, housing, caring for and training of these amazing animals. 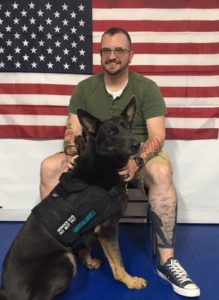 Ben Keen is a Veteran of the US Army who served from 1999 – 2008.  He served as a communication expert providing the critical voice and data network to the commanders on the battlefield.  Ben completed several combat deployments including being a member of the historic 101st Airborne Division (Air Assault) in 2003 during the initial invasion and occupation of Iraq.

Ben moved to Pittsburgh, PA at the end of 2007 and found work in the IT field.  Ben is currently employed at American Eagle Outfitters as a member of their IT department as a Senior Systems Administrator.

Ben is a resident of South Park, Pa where he lives with his wife, their 9-month-old son, 3 cats and Bolt.  He serves as a member of the board of directors for two Pittsburgh-based Veteran service organizations, Operation Troop Appreciation and Soldiers & Sailors Memorial Hall & Trust.  He is also an official ambassador for Guardian Angels Medical Service Dogs.

Ben has been recognized for his dedication to Veterans and their families by been named the 2016 American Staffing Association Nation Employee of the Year for his work on helping Veterans find meaningful deployment.  He has also been featured in numerous local and national publications including Time.com and Pittsburgh-based radio and newspapers.

In his spare time, Ben enjoys taking photos as well is an avid cigar smoker.  It is his goal that by sharing his story; he can help other Veterans and their families know they are not alone through their transition from the military and beyond.