Spotlight On: Liberators of the Concentration Camps

Spotlight On: Liberators of the Concentration Camps 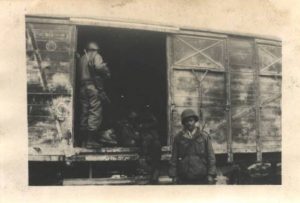 Throughout April, 1945 advance elements of American soldiers confronted the harsh realities of Nazi concentration camps, consequently placing them in the role of liberators. This month we will examine letters from liberators and a photographic record of what they encountered along with other objects as gathered from the archives at Soldiers & Sailors. We will also be joined by US Army Sergeant Guy Prestia of the 45 Infantry Division Company E- 157 Infantry Regiment. He will discuss his experiences during the liberation of Dachau. Join us as we learn about and pay tribute to the Liberators of World War II.

Lisa Petitta is the Collections Manager at Soldiers & Sailors Memorial Hall & Museum.  She joined the Museum in 2015 and has always had a passionate interest in military history. She is responsible for the safe storage of artifacts in the permanent collection, cataloging artifacts and has worked on display installations, museum tours, grant writing and fundraising events. She holds Masters in Military History from American Public University and a BA in History and Minor in Historical Preservation from the University of Pittsburgh.

Sergeant Guy Prestia served in the United States Army as a part of 45th Infantry Division Company E- 157 Infantry Regiment. He served as a BAR (Browning Automatic Weapon) man in North Africa, Sicily, Salerno, Anzio, Rome, Southern France and Germany. He spent 511 days in combat and served an extra 6 months in the Army of Occupation. He is a retired machinist who raised eight children. He serves as Deacon at his church and speaks to school children and civic organizations about WWII and the Holocaust so we never forget.