Spotlight On: Saluting Women in the Military

Spotlight On: Saluting Women in the Military

This month’s program will feature Major Kathy Silvia, a retired Army officer who was among the first class of women to graduate from West Point in 1980. During her 20 year military career (1980-2006), Kathy spent time serving in the fields of artillery and logistics. She is a former member of the 99th Division, also known as, the “Checkmate Division”. Today she calls Pennsylvania home and she has been appointed by the Board of Directors at the Military Women’s Memorial to reach Women Veterans from across the state. Please join us to learn more of Kathy’s story. 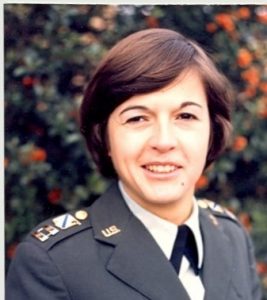 Kathleen Silvia attended US Military Academy, graduated among the first co-ed Class of 1980 with a BS in Engineering.  She was commissioned a 2LT in the Field Artillery to lead soldiers from platoon to Battery level.   Kathleen’s Missile assignments took her to Crete where (in 1983) her platoon ranked as the Battalion’s top firing platoon.  Later, she represented the US Army during a NATO Exchange assignment with the 3d Regt Artillery Marine (105mm) in France. She executed all of the soldier training alongside the French Artillerymen of the Regiment and briefed the Officers of this Regiment on the finer points about US Army’s Artillery (all in French of course).  After her FA Battery Command, the Field Artillery Branch presented limited options for women in the branch and Kathleen branch transferred to Logistics in 1986.  Her service in logistics took her to South Korea’s 2d Infantry Division where she orchestrated various supply and transportation support missions on behalf of the 16,000 soldier Division and the surrounding community.   She allocated the resources to recover from Typhoon Vera; assisted in locating and processing 3 human remains from a river drowning incident. In this role, Cpt Silvia supervised 30 South Korean security guards who protected Army resources.   She returned to the US to join 4th Infantry Division at Fort Carson, CO.  Then CPT Silvia was sent to Panama to work with SOUTHCOM’s Logistics Cell to craft BLUE SPOON, the logistics support plan for the 1989 invasion of Panama.

From 1989 to 1993, Major Silvia served as an Army Reservist preparing New England units for deployment overseas in response to the Iraqi Occupation of Kuwait (the 1990 Gulf War).   Over six units were sent from New England during the early stages to establish the legal Status of our deployed Forces, to move and supply the combat theatre.   She earned Reservist Officer of the Year for the State of Massachusetts in 1990.  As a citizen-soldier, Kathleen earned a Masters in Procurement while working full time.  Her work involved supervising staff in warehousing, logistics, procurement and production planning operations with such firms as Pepsi and Schering Plough.   She had a six year break in military service but, returned as a Reservist with the 99th RRC in Pittsburgh in 1999 again as a Logistics Staff Officer responsible for the command’s logistics posture.

In 2003, she was called to Active Duty twice (as mobilized Reservist, then as AGR),  to deploy with the 812th Transportation Battalion (Medium Truck) to the combat zone (Kuwait/Iraq).  With over 1200 truck drivers, this outfit executed transportation support from the seaport into northern Iraq.  She continued serving the nation until December 2006.  She began a quest to serve and honor other Veterans as an apprentice learning National Cemetery burial business, protocols and legislation.  She trained and graduated from the National Cemetery Administration (NCA) certified as a Cemetery Administrator in 2009 with the Dept of Veterans Affairs. She served with the NCA in positions of increased responsibility at Calverton National Cemetery (NY), Denver (CO) and then Baltimore (MD) as the Cemetery Director in 2010.  Continuing to serve Veterans, she became a Department of Army civilian to serve at West Point, New York’s Post Army Cemetery, 2011 to 2015.  In 2015, she he transferred to PA sustaining military missile systems at Letterkenny Army Depot in Chambersburg, PA and retired in late 2018.  The board of Directors at the Military Women’s Memorial had appointed her to cover the State of Pennsylvania and reach PA Women Veterans across these 67 counties.