Spotlight On: The Unknown Soldier of D-Day 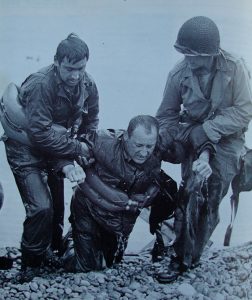 George Gaadt will be speaking about the unique story behind one of the most famous photographs taken during the D-Day invasion of Normandy in World War II. The photograph, taken by Walter Rosenblum, depicts two soldiers dragging a fellow soldier out of the water. Learn all about the three men in this photo and the connection one manhas to Western Pennsylvania.

George Gaadt is a noted American Artist, Illustrator and Portraiture painter who started his career with Hallmark, but has since worked for many nationally known brand names such as National Geographic, the Hardy Boys book series, the US Army and the NFL.  George has always had a passion for military history. As a young boy to present day, drawing, painting and collecting history have been a primary inspiration. The recipient of more than 95 awards, George has lectured widely and is a former instructor at Carnegie-Mellon University.