In 1967 Dan Telep was serving in the US Marine Corps at Con Tien, Vietnam. As a 2nd Lieutenant, Telep led a platoon of Marines in combat, was wounded 3 times and received the Bronze Star Medal. From his perspective the war shaped his views and how he has lived his life as a Vietnam veteran.

Michael Kraus, Soldiers & Sailors Curator, was a teenager during the 1960’s graduating high school in 1972. Kraus, along with his contemporaries, watched the war on television, witnessed and participated in mass protests and were influenced by the youth movement which was strongly anti-war.

Separated by 10 years in age both Telep and Kraus participated in the drama surrounding the era and the war. Both give personal perspectives of their experiences. 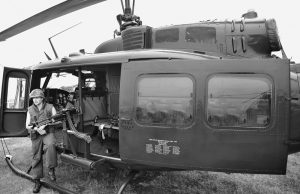